Town Hall Level 6 is one of the least exciting upgrades, unlocking only a few more buildings, but offering a lot of upgrades. This is a great time to focus on leveling up your defenses, something that will come in handy in the following Town Hall levels. The first thing to focus on is placing the extra Gold Mine and Elixir Collector that you’ve unlocked.

After placing the Gold Mine and Elixir Collector, it’s now a good time to focus on upgrading them. The max level for Gold Mines and Elixir Collectors is 10, and it’s important to have all of them at least up to level 9. This will dramatically increase your output and you’ll have to waste less time waiting for enough resources. Once you’ve leveled up those up, it’s now time to upgrade your Barracks to level 8. Level 8 Barracks gives you access to a new type of unit: The Healer. The Healer is a flying unit that follows around your troops healing all of them (in the area) every couple seconds. 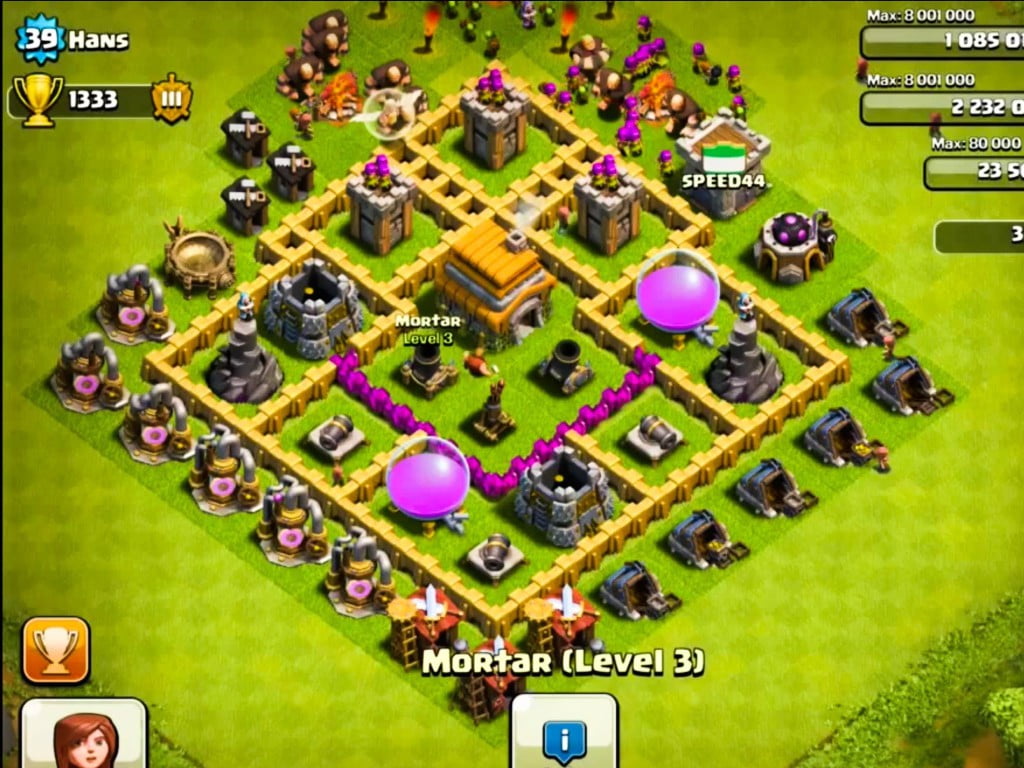 The Healer completely changes the game, and goes hand in hand with the Giant. In order to use these troops effectively, you need to upgrade your units. Luckily, Town Hall Level 6 gives you access to a new upgrade for your Laboratory, Level 4. The first, and most important upgrade is getting your Giants to level 3. This will make them significantly better than level 1 Giants, giving them almost double the damage per second, and more than a 30% increase in health.

Upgrading your Balloons to level 3 will make them twice as strong, and a 50% increase to health, making them unstoppable against other Level 6 Town Halls. Ensure that all 3 of your Army Bases have been placed, this will make attacks significantly easier. Town Hall Level 6 allows you to upgrade your Army Bases to Level 6, which will give you a troop capacity of 150. If you plan on attacking a lot, it’s important to find an attacking strategy that works for you.

At Town Hall Level 6, there’s really only three effective ways to go about attacking. The most popular strategy is to use only Balloons (ensure they are upgraded to level 3!) and swarm the enemy from all angles, so that you’re able to reach their single Air Defense before all your balloons are shot down. The next strategy involves using Giants, Healers, and Archers. If you plan on using this strategy, make sure your Archers are also upgraded to level 3. Use 3 Healers, a few Giants, and the rest Archers and focus on attacking from 3 different angles.

Finally, a very basic strategy that’s used at higher levels is the Wall Breaker and Goblin combo. Use Wall Breakers to make a few holes in their outside walls, then use tons (100+) of Goblins to run in and steal all of their Gold, Elixir, and maybe even Dark Elixir (even though you won’t be able to keep this)!

The final focus point for Town Hall Level 6 is your defenses. This Town Hall upgrade gives you access to another one of the single most important defensive units: The Mortar. It is imperative that you upgrade both of your Mortars to their maximum level, level 4. If you find your base still getting completely destroyed too often, think about placing your Town Hall outside of the walls.

Many attackers will simply destroy your Town Hall and leave, although you’ll lose trophies doing this, it’s very easy to gain trophies once you’ve leveled up more.