What to know before building your first Clash of Clans base

If you’re new to Clash of Clans, or happen to be struggling with creating your very first base, this is the article for you. Creating your first base is incredibly essential in Clash of Clans. Eventually your beginner shield will wear off and people will start attacking you. This may be a scary time for you at the moment, but after reading this article you’ll know exactly how to shape up your base so attackers will have a terrible time breaking into your base. You may notice when attacking other bases that certain people have bases that seem to be impenetrable, and some seem to be almost impossible not to break into. You don’t want a base that people can break into with a giant and a few goblins. You want something people will have to put effort into to penetrate.

We’re going to hand out a few tips that will assist you in building your first base. Let’s now get onto the tips.

Don’t build a base before the third day

If you’re super new to Clash of Clans, we advise that you don’t worry at all at first. You have a three-day shield that will make sure you can’t be attacked until you’ve surpassed three days on Clash of Clans. This doesn’t mean total play time, but three real life days. There’s no point building walls if they’re no use, and they’ll go towards protecting nothing. Use your gold at this time to build and upgrade gold mines and elixir collectors so you can gain resources while you don’t play the game or sleep. Save some gold on the third day so you can easily build up your walls on that day before people can attack you.

Don’t put everything inside your walls

Everything doesn’t need to be inside your walls. Unlike on other games where you keep literally everything inside your base, that is not necessary on Clash of Clans. As you’ll notice when attacking other people, you don’t really get anything besides a few percentage number increases when you destroy things like Builder’s huts, Laboratories (if you’re a higher level), Army Camps, or Barracks. For this reason, it’s not necessary to keep these inside your base. You don’t lose anything if your opponent destroys them, and if they’re dumb enough hopefully they’ll go for these when they initially attack you, and your attacking forces can kill their armies while they destroy pointless things like your Army Camps or Builder’s huts.

This is pretty much common sense, but make sure to keep other things inside your walls. Keep your Town Hall incredibly well-protected (as you lose any battle against an opponent if they destroy your Town Hall). Also protect your Gold Mines and Elixir Storages very well because otherwise your opponent can destroy them and steal your gold and elixir. As long as you have these three things protected, your opponent will have a hard time stealing your resources without seriously depleting their army. 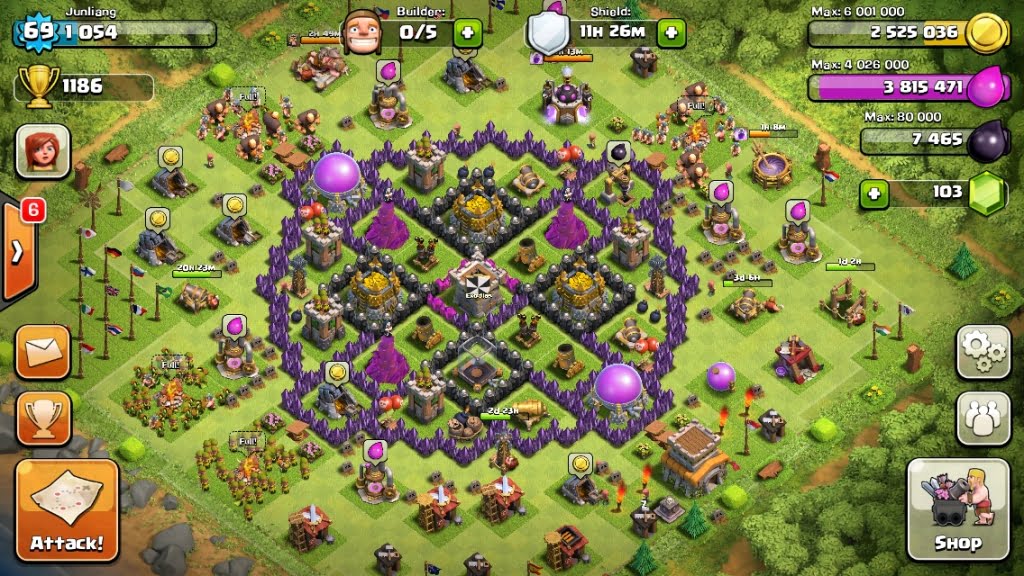 All in all, we’re not going to tell you exactly how to construct your base. That’s completely up to you. You can look up designs on Youtube or Google, but going with your own unique design might be the best course of action. If you go with a popular design, people will know how to attack it because so many other people will have used it. Instead try making up your own base. Your base doesn’t have to be a square or rectangle, it can be any shape you want it to be. You can also make it into a maze-like design which isn’t a bad idea. That way Wall Breakers can’t get into your base unless they break through multiple walls. Play around with designs and see which ones work well for you!

Just think logically when placing your defenses. Where would a mortar be most useful? Where the enemy will massively be coming in/stuck as it deals splash damage. Archers can only attack one army at a time so placing them within radius of your walls will allow them to pick off armies trying to come into your base. Same goes for cannons. Place them in areas that they’ll easily be able to pick off armies, and they’ll take armies down incredibly quickly at early levels. If you have spare money you aren’t using after battles, upgrade your walls too to make sure your enemy spends more time and resources breaking into your base.

As long as you follow some of these tips and try your own base design, you should be fairly safe in Clash of Clans. If you attack lots of people, expect to be revenge attacked back quite often. Hopefully your base will fare well! It will only get better as you progress through the levels and unlock new defenses.

Base Setups base setup, build base clash of clans